When it comes to the Olympic Games, there are few nations that are more successful than the United States. In fact, the USA has won a total of 2523 medals at the Summer Olympics and another 305 at the Winter Olympics. With that in mind, it is fair to say that this great nation has had a few standout performances and victories over the years.

With incredible athletes, such as Michael Phelps and Jesse Owens, it is no wonder that the US team has always been considered one of the best in the world.  However, what are the greatest and most impressive Olympic victories for this team? While there are so many performances that come to mind, we have made a list of the most memorable accomplishments, including the below.

Michael Phelps is one of the most well-known Olympic athletes of all time. In fact, you could ask someone who has no interest in sport or swimming if they know who Michael Phelps is, and they are likely to say yes. This American swimmer holds the record for most Olympic medals (28) won by any athlete. With that in mind, it is tough to determine exactly which race was his most impressive.

However, Phelps 2008 Olympic campaign was like no other. During the 2008 Beijing Olympic Games, Phelps won a total of 8 gold medals – this campaign earned him a place in history, as he beat Mark Spitz’s record of winning 7 gold medals in a single Olympiad. More so, the swimming sensation managed to break a total of 7 world records.

Simone Biles is widely considered to be the greatest US gymnast of all time. With a total of 30 Olympic and world championship medals, this athlete has put in some serious performances over her time. However, by far, her biggest and most impressive campaign as a professional gymnast had to have been the 2016 Rio de Janeiro Olympic Games.

During this Olympics, the star managed to win gold in 4 separate events, namely team, all-around, floor exercise, and vault. However, arguably her most impressive performance was in the floor exercise category. In fact, Biles performed so well that she even had a move named after her.

During the 2016 Olympic Games, Katie Ledecky managed to win gold in three separate freestyle events, earning herself a well-deserved place in US Olympic history. Anyone who was lucky enough to witness this feat should appreciate just how truly inspiring and impressive the achievement was.

It would be unfair to claim that one of these three specific races was more impressive than the others, as they were all equally spectacular. In fact, this achievement put Katie in the ranks of the best female swimmers to ever have lived. Ledecky has won five Olympic medals in total and currently holds the world record in the women’s 400m, 800m, and 1500m freestyle events.

When discussing the most historic athletics races in the world, you would be a fool not to mention Flo-Jo’s stunning 100m world record. Florence Griffith Joyner was an American sprinter who captivated millions all over the world. She is known to be the fastest woman ever to have lived, setting world records in the 100m and 200m events.

This track star ran a blistering time of 10.61 seconds during her 1988 Olympic campaign. To this day, very few women have even managed to get close to her record, showing the world just how amazing and talented she actually was. To make this campaign even more impressive, she ran a time of 21.34 seconds for the 200m event, claiming that world record as well.

Kerri Walsh Jennings and Misty May-Treanor performed incredibly well at the 2012 London Olympics, earning themselves the gold medal in the Beach Volleyball category. These two athletes are widely considered to be the greatest female Volleyball players ever to have lived, and their list of accolades tells us why.

The pair managed to win gold in 2004, 2008, and 2012, showing just how dominant they really were. However, their 2012 campaign was like no other. Many believed that May-Treanor and Jennings would not be able to defend their title for three Olympiads in a row. However, the talented duo proved everyone wrong when they dominated the games once again.

During the 1968 Olympic Games, Bob Beamon made history when he managed to jump 29 feet and 2.5 inches in the long jump event. Many say that this Olympic record is the most impressive of all, simply because he absolutely obliterated the previous record. For this reason, you do not need to know anything about the long jump to have heard the name ‘Bob Beamon’.

Nobody had ever seen a world record shattered by this margin before, and Beamon left the entire stadium speechless as he walked away with the gold medal. His record has since been broken, but Bob definitely earned his place in US Olympic history that day.

Jesse Owens is one of the most famous names in US athletics history. The track star gained fame at the 1936 Olympic Games after winning four gold medals in separate events. Owens was particularly talented in the sprint and long jump categories.

In fact, he set three world records and equaled another all within 45 minutes during a 1935 tournament. This is known to be the greatest 45 minutes ever to have occurred in sports history. However, his most impressive campaign had to have been during the 1936 Olympics.

Owens managed to win gold in the 100m and 200m events. On top of this, he smashed the 4 x 100m relay and long jump categories. At the end of the tournament, Jesse was named the Athlete of the Games and earned himself international fame.

During his 1984 Olympic campaign, Lewis managed to win gold medals in the 100m, 200m, 4 x 100m relay, and long jump events. He became just the third ever US athlete to win four gold medals in one Olympics, joining the ranks of Jesse Owens and Alvin Kraenzlein.

However, arguably Lewis’s most memorable performance had to have been at the 1996 Olympics. This was to be the athletes’ last ever Olympic Games, making it one of his biggest. In the end, Carl managed to walk away with a fourth consecutive gold medal in the long jump event, making him one of the greatest in US and world history.

Wilma Rudolph’s most defining moments as an American Athlete had to have been during her 1960 Olympic campaign. The athlete managed to win gold medals in the 100m, 200m, and 4 x 100m relay events, breaking the world record in each.

The track star was known as the ‘Black Gazelle’, because of her incredible speed, grace, and talent. During her time, she was known to be the world’s fastest woman, and rightfully so. Rudolph inspired millions across the world by winning the 100m and 200m races, making them two of the most impressive Olympic victories for the USA in history.

Mark Spitz was known to be one of the greatest US swimmers in history during his time as a professional athlete. He was named the most successful athlete in the 1972 Olympic Games after walking away with seven gold medals. At the time, this was a world record, and the feat earned Mark a place in world sporting history.

On top of winning seven gold medals, Spitz also managed to set seven new world records. His most defining and impressive races had to have been the 100m and 200m freestyle events during his 1972 Olympic campaign. When he was just 22 years old, the star swimmer retired from professional swimming and left an incredible legacy behind.

There have been plenty of incredible and inspiring Olympic performances from US athletes over the years.

A few of the most memorable include those from Michael Phelps, Simone Biles, Katie Ledecky, Flo-Jo, and Mark Spitz. 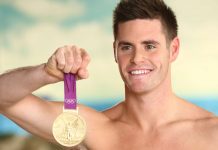 Olympic Athlete David Boudia Opens Up About His Journey