The Ultimate Fighting Championship (UFC) is the biggest MMA fighting brand in the world and features fighters from different martial arts genres, fighting it out inside the iconic UFC octagon, to prove who is the ultimate fighter.

With the addition of a female division, expansion into Europe and Asia, and its contract with ESPN, UFC’s popularity has sky-rocketed. The clinches, chokes, and locks are what keep UFC going, but the knockouts are what fans tune in for. Here are some of the biggest knockout moments in UFC history.

While Rashad Evans displayed top-tier MMA potential, he just could not make the cut when it came to popularity among fans. This changed overnight in UFC Fight Night 8’s main event with Evans, facing off against Sean Salmon. Evans’ victory was predictable, but the nature of it was not.

Round 1 was mostly Evans wearing down Salmon with wrestling and clinches. It was during round 2 that Evans landed his legendary head-kick, knocking Sean unconscious instantaneously.

This knockout at UFC 52 is one of the top knockouts in MMA history. On one side was Chuck ‘The Iceman’ Lidell, eager to avenge his defeat against the then light-heavyweight champion, Randy Couture.

The first round was savage, with Couture raining blows on Lidell’s temple and Lidell’s thumb plunging into Couture’s eye.

However, ‘savage’ took on a whole new meaning when Lidell punched Couture’s chin and knocked him unconscious. This victory was significant for Lidell because he reclaimed the light-heavyweight champion title that he had lost to Couture two years ago.

Dan Henderson earned the name ‘Dangerous Dan’ for very strong reasons, one of which is his UFC 100 performance against Michael Bisping.

Henderson and Bisping had unsettled beef from The Ultimate Fighter reality show where they had been rival coaches, resulting in much trash talk from Bisping’s end in the buildup.

However, all went in vain during the second round when Henderson landed a perfect hit on Bisping’s chin with all the strength in this right hand. Yet another punch followed on the already KO’d Bisping, earning Henderson’s knockout ‘Knockout of the Night’ and several Knockout of the Year titles.

UFC 239 saw two of the biggest MMA fighters, Jorge Masvidal a.k.a ‘Street Jesus’ and Ben ‘Funky’ Askren, facing off. The fight was wild and took only five seconds, making it the fastest knockout in UFC history.

The second the fight started, veteran welterweight Masvidal charged at a bent-over Askren, who attempted to duck a high kick but instead, received it flat on the ear and dropped unconscious.

But Masvidal hadn’t had enough, courtesy Ben’s nasty trash talk preceding the fight. Masvidal rained down a couple more punches before the referee intervened, making it the biggest victory of his career.

The match began with veteran Menne aiming ineffective jabs and then an inside leg kick. The kick was when Baroni aimed a solid punch at Menne’s temple.

It was a cakewalk for Baroni thereafter as he landed blow upon blow on a struggling Menne and in just over 18 seconds, Menne had been knocked out cold. What makes the victorious moment yet more remarkable is when Baroni straddled the cage afterward, screaming ‘I am the best ever!’

This fight was one of the most shocking comebacks in UFC history, and everything about it was like something out of a movie. Scott Smith and Pete Sell, both equally skilled and powerful, were facing off when Sell aimed a hook at Smith’s left torso.

This seriously hurt Smith and threw him off balance and seemingly unable to put up a fight.

Smith’s iconic comeback was in Round 2 when he landed an effective punch on Sell’s face, knocking him out. Following this, Smith himself collapsed in pain from Sell’s previous blow.

In November 2018, Chan Sung Jung and Yair Rodriguez engaged in an all-out brawl in the main event of UFC Fight Night: Korean Zombie vs. Rodriguez.

Rodriguez was headed straight towards his second loss inside the cage as the bout hit the fifth round. However, something miraculous happened in the final moments of the final round.

Rodriguez landed a highlight-reel elbow strike that laid Jung out cold the instant it struck. Jung collapsed on the mat, unconscious, throwing the whole stadium into a tizzy. The big wide hit at the final buzzer brought Rodriguez the much-needed knockout win.

Ex UFC Featherweight champion Jose Aldo’s knockout courtesy of Conor McGregor is what defines the word ‘legendary’. The Irishman knocked out his Brazilian counterpart in just 13 seconds in his first-ever title fight inside the Octagon.

Aldo hadn’t lost a single fight inside the ring in a decade until that day at UFC 194 in Las Vegas, Nevada. When the fight began, McGregor seemed to be at ease while Aldo seemed to be feeling the heat of the crowd’s screams.

Aldo overstretched with his right as McGregor counter-punched with razor-sharp accuracy. His knuckles crunched on Aldo’s temple as the former champ went down, marking the beginning of the McGregor era in the UFC.

Edson Barboza, one of the deadliest strikers in MMA, knocked out Terry Etim at UFC 142 with such force that many say he took his opponent’s soul along with the victory.

Barboza connected with a finely-timed spinning wheel kick to the temple and the very next moment Etim’s body lay flattened on the canvas, rigid as timber.

Terry fell flat on the ground like a rag-doll without the slightest awareness of his whereabouts. He could have had a career-ending injury if the fight hadn’t been interrupted there. Edison’s clean strong blow resulted in a timeless knockout win.

Pedro Rizzo was 11-1 in mixed martial arts (MMA) when he faced Josh Barnett. Rizzo was noted for his vicious leg kicks and stand-up abilities, but rival Barnett had never lost a fight.

It was shaping up to be one of the best UFC fights ever when Rizzo knocked out Barnett in the second round with a single blow.

This was the knockout that gave Rizzo a chance at the championship over Randy Couture.

That was the first time that two unbeaten warriors squared off for a championship. Lyoto Machida entered his light-heavyweight title match against Rashad Evans with a record of 14-0-1.

Evans was roughed up in the first round by Machida, who was unable to finish the fight by the buzzer. But what he did was display an unusual fighting style and Evans was stumped.

In the second round, he dropped Evans again and was able to finish him with a standout display of accurate striking and control. Rashad, even though badly hurt, gamely hung on till Lyoto’s final repetitive blows.

Having won the ‘KO of the Week’ by UFC, this was inarguably the most sensational knockout of UFC 70.

Mirko Cro Cop was completely taken aback by the solid head kick from kickboxer Gabriel Gonzaga. This fight was an important one for Cop as it was supposed to set him against Couture in the heavyweight title shot.

But Cop didn’t see the vicious head kick coming as Gonzaga struck him out. This put an end to the string of first-round finishes Cop had been flaunting the entire season. And it was one of many more to come from Gonzaga.

This one’s the most eye-grabbing UFC knockouts of all time with quite a dragged-out & physically straining fight. The tussle between Mike Russow and Todd Duffee went on for two rounds with Mike Russow taking on a slightly defensive role.

After having endured heavy punishment, Russow finally put Duffee to sleep with a straight right-hand punch in the 3rd round. It took fans by surprise as the fight was expected to be a slow but sure win from the Duffee.

These were some of the biggest popular knockout moments in UFC, though not the only ones. Every single one of UFC’s knockouts is just as thrilling, dramatic, and gasp-worthy as any other. 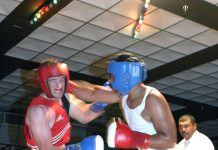 The Biggest Names in Heavyweight Boxing 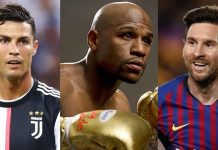