Do you want to begin a tennis career, or are you just a fan? One common thing that people find hard to understand is the tennis scores, what they mean, and how to calculate them.

But after reading this article, you will comprehend tennis scores like a pro. A Tennis game is played in three phases. They are; a game, a set, and a match.  For a tennis player to win a set, he/she must win at least six games.

A player wins a game when they score four points. These points are 15, 30, 40, and the winning point.  A match, on the other hand, is played to the best of three or five sets. Learn more below.

Every tennis match consists of two to three sets. When a player wins at least six games, then he wins a set.  Also, a player must win by two games to win a set.

For example, if a game has a 6-5 score, the leading winner must win the seventh game to win the set. Games are scored starting with zero or love, 15,30, and 40 to make 4 points.

Sometimes players get a tied score or a 40-40, called a deuce.

When players complete a game with a tie of 6-6, then a seventh game or tie break game is played to ascertain the winner. In this case, the usual tennis scoring technique is not used.

Rather it is scored as one, two, three, four, etc., until a winner is determined.  The winner is the participant that scores 7-6 by winning two consecutive points in a tiebreak.

How To Start A Tennis Game?

Before a game starts, the two players spin a racket or a coin to determine who serves first. The player who wins the toss will serve first and decide four things; that she’ll serve first, wants to receive first, the side of court she wants to play on, or she wants to leave these choices to her partner.

If a player serves at the start of the game, they continue serving until the game ends. The opponent then serves in the next game.

How To Score A Tennis Game?

Before a player serves, they have to say out loud the tennis scores starting with theirs then the opponents.

For instance, if you have 15 and your opponent has 30, you say ‘’15-30’’. Each time you serve, you are given two tries. Ensure you serve a ball that goes over the net and lands in your opponent’s service box.

Also, the ball must bounce once before your opponent returns it. You keep playing like this, hitting back and forth until one of you hits the ball out of bounds, in the net, or misses a shot.

In case you serve, and the ball lands out of bounds (out of service box), you serve the second time. If you miss it too, then you lose that point to your opponent and vice versa.  Another scenario is when the ball grazes the net and lands in the service box, this serve doesn’t count and is called a ‘’let’’.

The two players keep taking turns at scoring, saying out loud the scores until the score reaches 40. If the score is ‘’40-40’’, it is a deuce, another word for a tie. If a player wins two points consecutively, then they break a tie.

The player that serves at deuce and wins a point says ‘’my ad’’ to mean ‘’my advantage’’. In case your partner wins a point; also, the game goes back to deuce until one of the players wins two consecutive points.

How To Score A Set?

A tennis player must win a minimum of six games to win a set. Before you start a new game, the server announces the scores in sets, starting with yours.

For example, if your opponent won the first score, you say ‘’0-1’’. But like with a deuce, you must win a set by at least two games. If the score ties, then you play a tiebreaker until a player wins two games consecutively.

The tennis player that wins the best two out of the three sets wins the match. If two players each win two sets, you play the third set to choose the winner. If a player wins two sets, they automatically win the match.

Scoring in tennis is one of the confusing things that happen on a tennis court. You’ll hear terms like deuce, love, advantage, etc.

However, I believe after reading the above article; you understand those terms now. 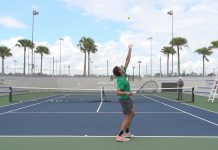