Tennis has a long history, with a variant of the sport played in ancient Greece thousands of years ago. Nowadays, the sport has over 87 million players and is loved by fans worldwide. It is one of the most accessible sports that can be played by people of all ages.

Whether you’d like to play professionally or just for leisure, learning about the fundamentals of tennis will help showcase your skills and develop your performance as a tennis player.

In this article, we have laid out everything you need to know to learn how to play tennis.

Tennis is a sport well-known for its many physical and mental health effects. It is a healthy form of recreation in addition to enjoying the moment on the court. Besides, it also enhances your balance, agility, and hand-eye coordination.

Tennis can help you stay healthy and in shape due to its upper body movement and footwork, like other strenuous physical activities. You can manage your weight by playing tennis as it burns calories and stimulates your metabolism, in conjunction with a balanced diet.

Tennis tactics involve many skills such as critical thinking, strategizing, problem-solving and fast decision-making. A tennis player should know when to time the split-step from the ready stance or when to move for an overhead smash, for example.

Furthermore, a tennis match has a requirement of having two players for singles and four players for doubles. Thus, tennis can help build your social skills, and your coordination skills if you play doubles.

Other Benefits of Playing Tennis

Tennis has been proven to improve your mood, according to scientific evidence. It increases the production of endorphins, the happy hormones, as well as increasing sensitivity to hormones such as norepinephrine, which reduces feelings of depression.

Remarkably, exerting effort in a sport like tennis will help you increase your overall energy levels. This advantage is also helpful for individuals who struggle with exhaustion and other sluggish symptoms.

According to research, 2.5 hours of moderate exercise a week or 35 minutes a day will result in a 65 percent change in sleep efficiency. This is something you can quickly accomplish by playing tennis.

Equipment You Need to Play Tennis

A tennis match requires a tennis racket, tennis shoes, a tennis ball, and a tennis court with a regulation net. The racket head and grip must be the right size and weight to be able to perform well.

You should wear shoes that have ample lateral support to protect your ankles from rolling through moving side-to-side. A specific dress code may be required at certain tennis clubs.

Fabric headbands and wristbands can also be worn to prevent sweat to flow on your eyes and your grip.

A tennis court is 78 feet long and 38 feet wide for doubles and 27 feet wide for singles. The court is separated in half by a net.  The net is 3 feet 6 inches high at the sidelines and is 3 feet high in the center.

The baseline refers to the boundary line that is parallel to the net that marks the beginning and end of the court on both sides. A center mark is used to identify the center.  It is in the middle of the baseline that acts as a reference for players when serving.

Players can toss a coin or spin a racquet to decide who will serve first. The winner of the toss will choose to either serve or receive first. The receiver gets to pick which side of the court they want to return to if the winner wishes to serve first.

Playing tennis should be within the boundaries. In a singles match, the serve must fall over the net and inside the opponent’s opposite service box. A “let” happens when the ball leaves the net but still lands in the correct service box, and the server must restart from the first serve.

A ball in the air is still a playable ball. Even though the opponent is way past the baseline in the “out” zone, the ball is still in play if they make contact with it or it touches a part of their body until it bounces. It is not possible to call a ball until it has bounced.

Avoid touching the net. You have full freedom to rush the net and execute whatever volleying maneuver you like. However, if some part of you or your racket physically hits the net at any time during a point, you immediately lose.

At all times, you must hold your racket in your hands. You will lose the point if you drop or throw the racket at the ball. Just your racket and no other part of your body can return the ball.

Knowing how to keep score is an integral part of understanding the fundamentals of tennis. A match consists of six games, and most sets are played best out of three (men’s professional sets are best out of five). Players must win each set by two games.

Tennis has a unique scoring system with different point values and terms. Each game begins at 0-0, or “love,” and progresses to 15, 30, and eventually, 40 points for each point scored. For instance, if both players win one point in the game, the score would be 15-15 or 15-all.

The score of the server is announced first. Just one player serves every game, and always begins on the right side of the court, switching sides at every point. The players swap serving at the end of each game, and they alternate which end of the court they serve on every other game.

The “ad-phase” starts when each player earns enough points to raise the score to 40-40, also known as a deuce or 40-all. Since each game must be won by two points, one player must score two consecutive points.

“No-ad scoring” is also appropriate if you choose to play a faster game. If you and your opponent choose to play this way, 40-40/deuce becomes the game point, and the player who wins the next point wins the game.

Types of Shots in Tennis

There are several different tennis shots you can use to keep the ball in play. It will also give you a structure for deciding which tennis strokes and shots you can focus on enhancing.

Any tennis point begins with a serve. Many players try an offensive shot with plenty of power on first serves to achieve an early advantage over their rival. Second serves are usually slower and more careful to avoid a double error that would result in an immediate point loss.

Other Types of Tennis Shots

When a player hits the ball before it bounces at or near the net, it is called a volley. By narrowing the gap to the net and volleying the ball, you will drive the opponent into defense or strike a winner. Moving closer to the net also gives more drastic angles on your shots.

A lob is shot over an opponent’s head near their baseline after they have reached the net. Though this shot can be difficult to perform, particularly to tall players, it can be especially helpful if your opponent has come too far forward.

Tennis is an amazing sport that offers many benefits. It has been played for decades and attracts loyal sports enthusiasts all over the world. Several factors involve playing tennis such as rules, scoring, equipment, and types of shots.

By knowing the fundamentals of tennis, you will be able to play the sport with ease. Remember to keep all the information in mind and to put it into practice when you schedule your next tennis match. 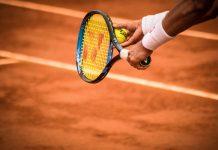 A Guide to Understanding Tennis Scores