Founded in Britain, Rugby is now a popular sport across the world.

The game is said to have started at the Rugby School of Warwickshire in 1823. William Webb Ellis changed the nature of football when he picked up the ball and started running with it instead.

Scotland is one of the most successful and competitive national teams in the rugby world. Scottish rugby has produced some of the world’s best rugby professionals over the decades. In the article below, we will take a look at the history of rugby in Scotland.

First of all, let’s take a look at the origins of rugby in Scotland. Rugby in Scotland owes a huge debt to the local towns and communal teams who would fiercely take part in the Ba’ games. The first-ever Ba’ game was played in 1815 which was organized by renowned author Sir Walter Scott, Ettrick Shepherd, poet James Hogg, and the fourth Duke of Buccleuch.

Around 1000 men participated in the game between Selkirk and Yarrow. People who live in the Scottish Borders are very fond of rugby, and it is more popular than many other sports.

It was in the Scottish Borders that the rugby-sevens, a shorter and faster form of the original game, was introduced. The first-ever rugby international match was played at Raeburn Place in Edinburgh in 1871.

In the beginning, the country did not have a proper rugby field and the first nine international matches were played on the cricket field of The Edinburgh Academy. For spectators, a temporary stand was also built at a cost of £45.

The Scotland Rugby Union is the governing body of rugby in Scotland and has a rich history itself.

It was founded in 1873 as the Scottish Football Union (SFU), but it later changed its name to the Scottish Rugby Union in 1924.

In 1897, the SFU bought land at Inverleith which later served as the home of rugby in Scotland.

Murrayfield Stadium was built in 1925 and has been the home of Scottish rugby ever since.

The Best Talents and the Golden Year

Scotland may not be enjoying its golden era in rugby today, but this has not always been the case. In the decades of the 80s and 90s, Scottish rugby was at its peak.

The team’s greatest years in the modern era was probably the 90s. In 1991, under the captaincy of David Sole, Scotland went on to win 13-7. They also won their third Grand Slam.

However, over the years, Scotland has blessed the world with some amazingly talented rugby professionals. From Tom Smith and Colin Deans to Stuart Hogg and Jamie Ritchie, the country has many famous rugby players.

The world simply cannot deny the fact that Scotland rugby has had a huge impact on the game over the years.

Rivalry with England and the Calcutta Cup

When it comes to rivalry in the game, the most famous one has to be the rivalry between Scotland and England.

Their rivalry stretches back to the first-ever international rugby match in 1871. This rivalry has always been on the news and is celebrated with the Calcutta Cup.

The Calcutta Cup is a silver trophy that was created in memory of the Calcutta Football Club. The first Calcutta Cup was played on 10 March 1879, at Raeburn Place in Edinburgh. This match ended with a draw.

Both countries have contested for the cup ever since, except during the two World Wars. The current holder of the trophy is England, who has also won the cup 71 times. Scotland has won it 40 times.

Additionally, the college rugby teams and the women’s team have made it onto the rugby leagues in recent years.

American Football x Rugby: Main Differences, Similarities and Which One Is Personally Best 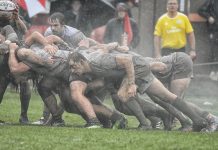 How To Watch Rugby On Your Smartphone 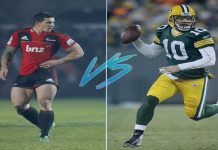