Watching a football game on television can sometimes be tough, especially when you’ve got all sorts of other committments. Fortunately, you can catch these games on your smartphone with ease when you are not at home.

Most of us have been in such situations before. Traveling, gatherings with friends and family, and commuting to work could be some reasons behind not being able to watch NFL games on the television. Let’s be real; we would rather watch the game if we had the choice.

Luckily, plenty of ways, like watching the game on your smartphone, are there to help us keep up with NFL action. Because of this, we do not have to be restricted to the couch. In this article, we’re going to cover 4 ways to watch NFL on a smartphone.

Things to Know Before Streaming the Game

Note that several online TV services like YouTube TV and Sling TV do no permit people to watch NFL games on their smartphones due to rights restrictions. Therefore, the best options to stream these games on your phone would be applications like Yahoo apps, NFL mobile, and NFL Sunday Ticket. Mentioned below are some of the best options to watch NFL games when you are on the move.

Customers of Verizon have access to the NFL mobile app through Android or iOS phones. You can watch local as well as prime time matches. This also includes Monday and Thursday night games.

If you do not happen to be on the same carrier, you will only be limited to stories, scoring updates, and highlights.

Verizon is slowly expanding its coverage to Go90, Yahoo sports, and AOL. Football fans who receive wireless broadcast through other carriers will find this news to be great.

Although this mobile viewing option is not cheap, it is worth the price. It allows you to watch all the big Sunday games on the go. There are several packages for this option so you can choose according to your budget.nThere are also a few student packages with great discounts.

Sunday ticket apps to watch NFL are present on Android and iOS. A small drawback of this option is that it does not let you watch playoff games, Monday, and Thursday night games.

In case you happen to be a cable subscriber, the Fox Sports Go app, Watch ESPN app, and NBC sports apps are good options for viewing the games on Android and iOS. You will need to download the applications to your phone and log in your credentials to stream the game without any additional charges.

With the contract changes in Verizon, there are new game viewing opportunities for subscribers who are beyond Verizon. The Yahoo Sports app will now be front and center for streaming NFL playoffs live on its sports app on iOS and Android.

It is easy to watch NFL games on your smartphone these days. The above-mentioned apps will be more than enough for you to support your favorite teams on the go. The charges and packages vary for all apps, so make sure that you get a package that is favorable for you. 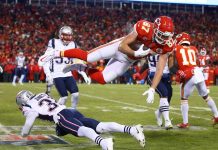