At the heart of all sports is great drama, so it’s not surprising that Hollywood has got in on the action by creating inspirational movies about sports teams. Movies about sports usually bring in big money and the more inspirational the sports story the more accolades writers, actors, and creators of those movies receive. Sports are about competition and perseverance when the going gets tough, which is why they resonate with a wide audience.

Although it’s not just sports fans that love watching inspirational movies about sports teams, sports fans are more likely to have a favorite sports movie. Often times that favorite movie is about their favorite sport and the challenges the athletes in that sport face. Classic sports movies that everyone loves include Rocky, A League Of Their Own and Hoop Dreams.

We decided to come up with a new list of the best inspirational movies about sports teams. Although the above will always be favorites, we’ve decided to give some newer movies a chance. This list is by no means comprehensive, but these are some of the favorites amongst our team here. Have a read through below and you never know, you might just find a few new inspirational movies to watch on your next movie night.

So. Let’s get started on the best inspirations movies about sports teams list

This is a 2004 movie that stars Kurt Russel, Herb Brooks, Eddie Cahill. It is a story of a group of misfit hockey players who are selected to join the hockey team for the Olympic Games of 1980 that were held in Lake Placid New York. Now, doesn’t that sound like an interesting storyline already? So, these hot-headed players, who were always fighting during practice have a great coach, who is able to band them together to form a family.

It is a pretty long movie, but if you love hockey, it is quite interesting, because you shall get to see how the players grow while fighting for their country, and eventually become the reigning champions at the Olympic Games for the next ten years. You shall also get to witness how the players move from being a ragged team into champions of Hockey.

The Greatest Game Ever Played

This movie is about golf. The stars of the movie are Shia LaBeouf, which is probably enough for most people to give it their time. If you are not a fan of golf or probably think it’s a boring sport, you shall be surprised at how interesting the movie is to follow. You may even end up picking it up as a relaxation sport.

The star of the movie learns of a famous golf player and decides to go and watch one of his games. During the game, the famous player teaches the star how to hold a gold club, and in another scene, we see LaBeouf trying to become an amateur golfer. The movie takes you through most of his trials and tribulations, and you get to watch him become one of the greatest golf players in the world.

Trouble With The Curve

This may not be the most inspiring sports movie, but it is still good. The story behind the film is of a scout who looks for talent together with his daughter, and how they eventually find the best player in the world for the team they have been scouting for.

It is a movie about baseball and stars probably some of the most famous actors – Amy Adams, Clint Eastwood, and his son Clint Eastwood, John Goodman, Justin Timberlake, etc. That cast alone will pique your interest. The movie ends up showing the viewers how important it is in the game of baseball to know someone and their skills. It also shows you how childhood memories can mess with your future but they can also create in you some strength you did not know you had.

This movie grossed more than $100 million in the box office, against a production budget of $50 million, which means that it was extremely popular and profitable. Also, the long lineup of stars in Moneyball must have contributed to its popularity. The film starred Brad Pitt, Jonah Hill, the late Philip Seymour Hoffman, Chris Pratt, and others.

This movie introduced the audience to many different aspects of the game of baseball. This was a true story based on the Oakland Athletics team which was not doing too well before a new manager gave them an idea of how they could win. 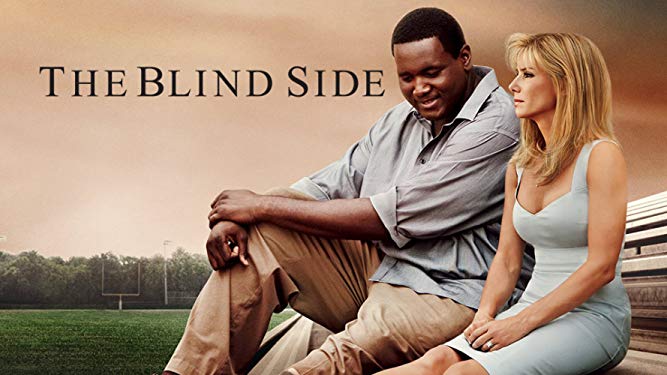 This incredible movie was the most talked about during the 2009-2010 academy award season. The movie grossed more than $300 million at the box office, and the cast, which was led by the incredible Sandra Bullock won numerous awards. In fact, Bullock took home the academy award for best actress. Based on a true story, the movie is extremely inspirational, and it made people believe that if they work hard enough, there is really nothing they cannot achieve. Watch it and see how Sandra Bullock transforms the life of a teenage boy.